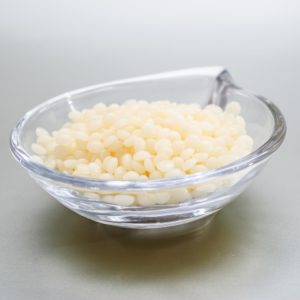 Origin:  It is obtained from the leaves of the carnauba palm by collecting and drying them, beating them to loosen the wax, then refining and bleaching the wax.

Overview: Carnauba wax  is a wax of the leaves of the palm Copernicia prunifera (Synonym: Copernicia cerifera), a plant native to and grown only in the northeastern Brazilian states of Piauí, Ceará, Maranhão, Bahia, and Rio Grande do Norte. It is known as “queen of waxes” and in its pure state, usually comes in the form of hard yellow-brown flakes.

Because of its hypoallergenic and emollient properties as well as its shine, carnauba wax appears as an ingredient in many cosmetics formulas where it is used to thicken lipstick, eyeliner, mascara, eye shadow, foundation, deodorant, various skin care preparations, sun care preparations, etc. It is also used to make cutler’s resin.

Ideal Concentration Level in Products: 2% to 40% added to the oil phase of formulas requiring emulsification.